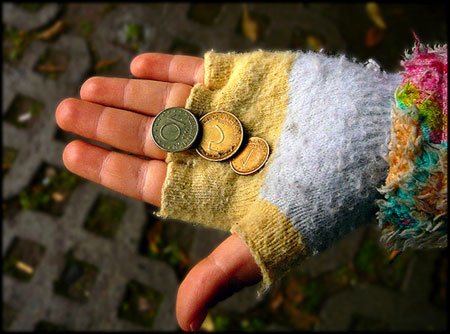 Last week, we learned from U.S. Census data that one of every six American households is living in poverty.

Worse, almost one of every four children is growing up poor. Most people I spoke to, even my radical social justice friends, were stunned. It’s past heartbreaking. It’s frightening.

But it creates a teachable moment. Our anxiety about the economy, job security and our investment portfolios, and concerns about so many of our fellow citizens cratering into absolute poverty, are actually two sides of the same coin. I’m not just talking about the fact that when the economy tanks, more people lose their jobs and become poor. There is something else happening to the relationship between economic development and poverty, something that could actually bring the feuding interests of the economic and social justice sectors together.

In the past, local efforts to help the chronically poor and the hard-to-employ relied primarily on a community’s humanitarian motivations. But powerful new demographic forces are creating a new rationale for investing in solving the poverty problem: economic survival.

Many communities don’t have enough qualified residents of working age, or enough in the pipeline, to staff their economies without stealing talent from other communities. Unless these communities figure out how to systematically move significant numbers of their local chronically poor and unqualified residents into the ranks of the qualified, they might be doomed. It’s hard to believe with 14 million people out of work, but consider this:

First, rising life expectancy, a falling birth rate, failing public schools, the imminent retirement of 75 million boomers and a growing skills mismatch mean the country is going to run short of qualified workers. An explosion of dependents, mostly retired adults and unemployable workers, is going to overwhelm the shrinking proportion of qualified workers. To keep the place you live from going down the tubes, the local economy must grow faster than the population.

The other thing is that the unemployment rate in this scenario is irrelevant. The moment a community reaches full employment of its qualified work force, economic development becomes impossible. You could have double-digit unemployment among the unqualified and you’d still be starved of the talent needed to create jobs and grow the economy. Getting stuck in one of these loser communities dramatically increases the chances of you becoming and staying poor.

The historical adversaries — champions of the economy and those working the poverty and work force development side — need each other now.

New Mexico is becoming a hotbed of innovation in this space. A think tank called Move the Mountain that’s focused on eradicating poverty is a good example. It has developed a program called Circles that systematically moves families out of poverty.

The group takes chronically poor, hard-to-employ heads of households, runs them through a rigorous prescreening and preplacement curriculum, then cocoons them with a support group of two to four trained allies recruited from the community. The allies help find them jobs and provide three years of round-the-clock tactical support. In the first 18 months, clients see an average increase in household income of 48 percent, and an average increase in assets of 115 percent. The program, which operates in 62 communities in 23 states, plans to roll out in New Mexico this year.

Another major innovation under way in Albuquerque is the ACE Leadership school, a brainchild of Tony Monfiletto and the Association of General Contractors. They have literally redefined the role of the public school by connecting the work force needs of a local economic sector, in this case the architecture, engineering and construction professions, with the pressing need to reduce the dropout rate.

They use an innovative career technical education approach and take only low-income students. The first year, ninth graders’ math scores went from the 7th percentile to the 81st, and reading went from the 34th to the 67th percentile.

It’s a promising mix: rising concern about poverty, a looming shortage of qualified workers and a growing community of innovators. It’s pretty ironic, however, that we need to be saved by the poor.