Getting beyond ‘a mediocrity mill’: leaders sound off at second Reinventing Our City conference Video – Albuquerque Business First 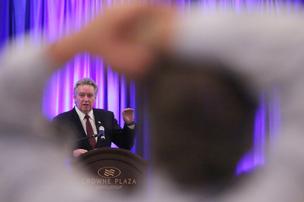 Cities that have successfully reinvented themselves and grown their economies recognize that failure is part of the path to success. After all, not every idea or startup succeeds.

But in Albuquerque, failure — even one — can be fatal, city of Albuquerque Economic Development Director Gary Oppedahl said Thursday.

“In other places, failure is an integral part of the process. In Albuquerque it’s a tombstone,” he said at the Reinventing Our City conference sponsored by Albuquerque Business First.See the accompanying slideshow for photos from the event.

Albuquerque’s attitude toward failure and its aversion to risk has turned the region into “a mediocrity mill,” Oppedahl added.

Oppedahl was one of several speakers at the conference, which was intended to start the process of developing a strategic economic development plan for the area and to educate community leaders on how economies work.

Here are several takeaways from the conference:

“The only real way to grow an economy is through economic-base jobs, or jobs whose goods or services are exported outside the community. Those jobs bring new money into a community and help grow its economy,” he said.