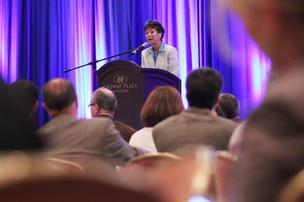 Debbie Johnson, a longtime Albuquerque entrepreneur and advertising executive, is the director of Central New Mexico Community College’s new Office of Education, Entrepreneurship and Economic Development. “We are in a crisis, and I think it has gotten everybody’s attention,” she said at the Reinventing Our City conference sponsored by Albuquerque Business First.

But that expansion won’t occur unless the city’s business, political and community leaders believe they can work collectively to change the economy, Lautman said during a presentation at the Reinventing Our City conference sponsored by Albuquerque Business First. See the accompanying video for more.Albuquerque’s economy is in a life-or-death struggle, and the metro area must take action to expand its economy, economic development expert Mark Lautman said Thursday.

“This is a life-or-death issue for the community right now,” Lautman said. “Do you really believe you have influence about how your economy will turn out? If you don’t, you don’t.”

Lautman, owner of Lautman Economic Architecture, told the audience at the Crowne Plaza hotel that the area has to focus on creating economic-base jobs, or those jobs whose goods or services are exported out of state.